Think tank 38 North reports in a new statement that satellite images out of North Korea show that the nation has begun dismantling parts of the Sohae Satellite Launching Station, a site used in the testing of ballistic missiles. 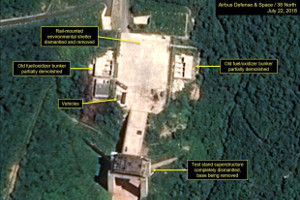 They cited images of a building used to assemble space-launch vehicles being dismantled, and a test stand used for the development of liquid-fuel engines. Though the site was meant to put satellites into orbit, US officials claimed satellite launches effectively missile tests.

The dismantling at the site comes after Kim Jong-un promised to halt all missile testing, and is a significant confidence-building measure. North Korea has been dismantling a number of sites around the country related to their nuclear program.

North Korea’s increasingly successful diplomacy with the US and other nations is likely encouraging such measures. As North Korea disarms, in keeping with such deals, there are growing calls for sanctions relief, though the US is so far resistant.