US officials say they will not accept any referendum in breakaway Eastern Ukraine about accepting an offer of autonomy as part of Ukraine. They say no vote would be legitimate unless the rebels surrender first, and the vote is held under the auspices of central government rule. 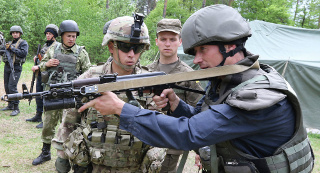 The referendum is being pushed by Russia as a solution to the Eastern Ukraine war, which has been in a state of on-again, off-again ceasefire for years. Russia generally supports the rebels, while the US has been backing the government.

Underscoring that the US is backing a solution that doesn’t involve a free, internationally supervised election, the Pentagon announced Friday that they are adding another $200 million to military aid to the Ukraine. They say this is intended to improve Ukraine’s military capabilities.

The Minsk Agreement ceasefire was not backed by the US, and repeated influxes of US weapons to Ukraine’s military are seen as reflecting general US support for crushing the rebels militarily.