On Wednesday, President Trump told reporters that he is the toughest president against Russia in American history, saying he thinks Russian President Vladimir Putin understands that. He told the media that Russia no longer poses a threat to the US. 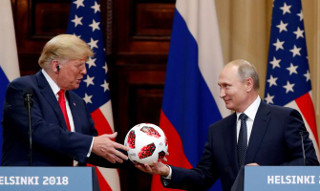 This comment, as with every other post-summit comment suggesting anything short of full hostility toward Russia, fueled condemnations from lawmakers, with Sen. Chuck Schumer (D-NY) demanding Trump walk back the comments.

Trump’s comments seemingly contradicted the position of his Director of National Intelligence Dan Coats, who after the summit claimed Russia’s “hostile activities” are continuing and expressed concern Russia would try to meddle in America’s mid-term elections.

28 thoughts on “Trump: Russia Doesn’t Pose a Threat to US”