In a Thursday morning vote, Israel’s parliament has approved the final language of the long-debated Jewish Nation-State law, which revises the nation’s Basic Law to declare Israel “the national home of the Jewish people.” The vote passed 62-55. 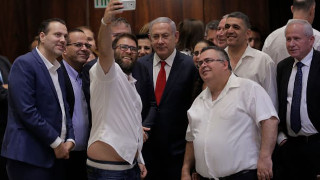 The bill has been under consideration in various forms since 2011, and was designed particularly to encourage Israeli courts to view Israel’s Jewish character as a priority over concerns about democracy. The bill also downgrades Arabic from an official language to simply one with a “special status.”

Most recently, the bill has added language encouraging the establishment of Jewish-only communities, which along with the downgrading of Arabic has fueled complaints that the law is effectively trying to enshrine Israeli Arabs’ status as second-class citizens as a matter of Basic Law. The Jewish communities language was downgraded just before the vote to avoid major disputes, and now those communities are not formally forbidding Arabs.

Arab MPs who complained about the bill following the vote were expelled from parliament. MP Ahmed Tibi in particular declared the bill a “racist law,” leading Prime Minister Benjamin Netanyahu to furiously condemn him for “daring” to criticize it.

In addition to the nation’s Arab minority, Israeli leftists were also critical of the bill, warning that it threatens to upset an already difficult balance between Israel’s Jewish and democratic values and risks doing long-term harm to the later for the sake of the former. Here is the outline of the changes to the law.

Basic Law: Israel as the Nation State of the Jewish People

A. The land of Israel is the historical homeland of the Jewish people, in which the State of Israel was established.

B. The State of Israel is the national home of the Jewish people, in which it fulfills its natural, cultural, religious and historical right to self-determination.

C. The right to exercise national self-determination in the State of Israel is unique to the Jewish people.

2 — The symbols of the state

A. The name of the state is “Israel.”

B. The state flag is white with two blue stripes near the edges and a blue Star of David in the center.

C. The state emblem is a seven-branched menorah with olive leaves on both sides and the word “Israel” beneath it.

D. The state anthem is “Hatikvah.”

E. Details regarding state symbols will be determined by the law.

3 — The capital of the state

Jerusalem, complete and united, is the capital of Israel.

A. The state’s language is Hebrew.

B. The Arabic language has a special status in the state; Regulating the use of Arabic in state institutions or by them will be set in law.

C. This clause does not harm the status given to the Arabic language before this law came into effect.

5 — Ingathering of the exiles

6 — Connection to the Jewish people

A. The state will strive to ensure the safety of the members of the Jewish people in trouble or in captivity due to the fact of their Jewishness or their citizenship.

B. The state shall act within the Diaspora to strengthen the affinity between the state and members of the Jewish people.

C. The state shall act to preserve the cultural, historical and religious heritage of the Jewish people among Jews in the Diaspora.

A. The state views the development of Jewish settlement as a national value and will act to encourage and promote its establishment and consolidation.

A. Independence Day is the official national holiday of the state.

B. Memorial Day for the Fallen in Israel’s Wars and Holocaust and Heroism Remembrance Day are official memorial days of the State.

The Sabbath and the festivals of Israel are the established days of rest in the state; Non-Jews have a right to maintain days of rest on their Sabbaths and festivals; Details of this issue will be determined by law.

This Basic Law shall not be amended, unless by another Basic Law passed by a majority of Knesset members.