In comments made during the Sunday Meet the Press show, President Trump declared that the US has “a lot of foes,” singling out the European Union first and foremost among them. He went on to say that he has “a big problem” with Germany. 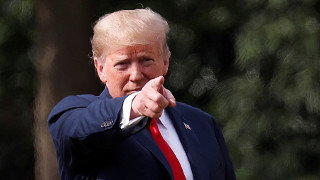 In talking of America’s foes, Trump said the EU is a foe, and Russia “is a foe in certain respect,” while China is “a foe economically.” He said his problems with the EU centered on “what they do to us in trade.”

Trump downplayed the significance of these declarations, saying it “doesn’t mean anything” to be a foe except to acknowledge that they “are competitive.” It is noteworthy, however, that last week he downplayed the idea of Russian President Vladimir Putin as an enemy, presenting him as a competitor instead.

European Council President Donald Tusk faulted Trump’s comments, insisting the US and EU “are best friends,” and claiming that anyone who said they were foes “is spreading fake news.”

Trump’s complaints about EU members didn’t stop there, however, saying “I have a big problem with Germany because Germany made a pipeline deal with Russia.” During the NATO summit, Trump accused Germany of being under Russian control. During Sunday’s comment, he said the Germans are “waving a white flag” in buying energy from Russia.

13 thoughts on “Trump Declares EU a ‘Foe,’ Alongside Russia and China”