An Egypt-brokered ceasefire on the border between Israel and the Gaza Strip brought heavy exchanges of fire, some of the heaviest since the 2014 Israeli invasion, to a quick and relatively orderly halt. All signs are that the ceasefire is holding. 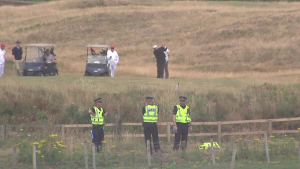 Israeli officials are attributing the recent violence to Friday’s protests at the Gaza border, during which an Israeli major was injured by a hand grenade. Israeli military officials say the weekend attacks on Gaza were retaliation for that casualty, and that it was “sufficient reason to go on the offensive.”

A pair of Palestinian teenagers who were on a rooftop when they were targeted by an Israeli air raid were reported killed. So far these are the only deaths confirmed. The UN warned it could’ve been much worse.

UN officials say that before Egypt worked out a deal, the two sides were very close to an “all-our war.” All-out wars against the Gaza Strip have been common in recent years for Israel, and some officials have been treating another such war as a virtual inevitability.

Egypt has been scrambling to try to broker not just this short-term ceasefire for Gaza, but a very long-term one, which had been making progress up until recent weeks. There hasn’t been any talk of renewed progress on that since the recent flareups.