Released on Sunday, a new report from the UN Assistance Mission in Afghanistan says 1,692 civilians were killed across Afghanistan in the first six months of 2018. This is the highest death toll for a half year since the UN started keeping track. 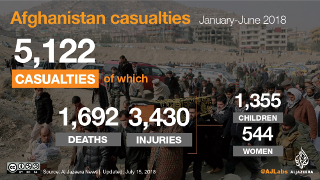 Interestingly, the same report showed a slight decline in overall casualties among Afghan civilians over the same period. This suggests the attacks are deadlier but leaving fewer survivors overall.

It is particularly noteworthy that this half year set a new record, as it came with a multi-day ceasefire during Eid al-Fitr in June, during which fighting nationwide ground to a virtual halt.

This increase in deaths is seen as being driven at least in part by a substantial rise in suicide attacks. That included some very large scale attacks attributed to ISIS. The UN found over half of the casualties from suicide attacks were from ISIS-launched attacks, underscoring that group’s growing influence in the country.