Those expecting President Trump to make a stir at the NATO summit with demands for more military spending did not disappoint, as he not only demanded all member nations increase spending to 2% of their GDP immediately, but then pushed for them to ratchet up to 4%. 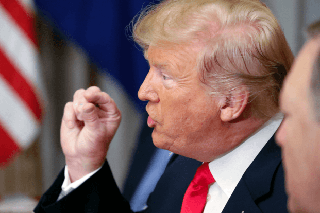 This stunned many, as the 2% demand is often repeated and met by a handful of NATO countries in the first place. No NATO nation is spending 4% of their GDP on their military, meaning this is a demand for precipitous spending increases alliance-wide.

Needless to say, the 4% is going to be a non-starter for most. Nations like Germany balked at increases to 2%, having no enemies on their borders and large economies. Expecting Germany to more than triple their military spending chasing this new level is even more unrealistic.

The 4% demand is so sudden that it raises questions about whether Trump’s comments are a sincere proposal of policy, or just part of an attempt to bargain the NATO nations up, in hopes that 2% will seem a lot less unreasonable by comparison.

The higher number is in keeping with President Trump’s desire to see NATO nations pay “their fair share” to the alliance, but aims so high it would counsel a big military spending increase for everybody, meaning it is almost certain to be universally opposed.