The Israeli Navy was dispatched Tuesday to stop a boat which departed the Gaza Strip, and which was carrying injured Palestinian civilians. The boat intended to take the injured civilians from border protests to Cyprus for medical treatment. 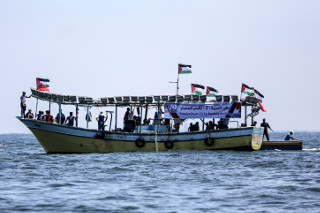 The Navy stopped the boat, surrounding it and towing it to an Israeli naval base at Ashdod. The military’s statement claimed that injured people on board are being treated by the Israeli military’s medical personnel.

The military statement condemned Hamas, claiming the group was behind the “provocation on sea,” and was trying to “take advantage of injured and handicapped people.” Not mentioned in the statement was that the wounded Palestinians were wounded by Israeli crackdowns on protests.

Israeli officials are arguing that the capture of the ship was legal because they consider their naval blockade of the Gaza Strip legal. Putting aside that question, the blockade was imposed to try to prevent ships reaching Gaza with goods, and is now being interpreted as forbidding people from fleeing the strip, even just to receive medical treatment.