President Trump’s visit to the NATO summit in Brussels in expected to come with a whole flurry of demands for NATO nations to increase military spending. This is virtually a constant for NATO summits, and normally wouldn’t be a big issue. 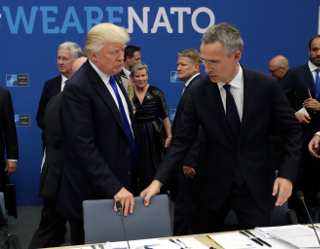 That Trump will be meeting with Vladimir Putin almost immediately thereafter, however, has NATO nations taking a lot more notice, and diplomats predicting Trump will make threats to redraw the security landscape in Europe if NATO doesn’t give him what he wants.

Diplomats are quoted as predicting that Trump will threaten to pull US troops out of Ukraine, and ultimately out of Europe in general over the spending demands. He may even refuse to take part in joint NATO exercises going forward if they don’t spend more money.

It’s not clear any of this is actually being considered. US reports have suggested Trump may be interested in a drawdown in Germany, but the much greater changes seem to just be further panicky speculation built around Europe’s general opposition to the Trump-Putin summit.