Secretary of State Mike Pompeo is headed to North Korea on Thursday for high-profile talks. These talks are intended to produce a clear step-by-step plan on denuclearization and peace on the Korean Peninsula. 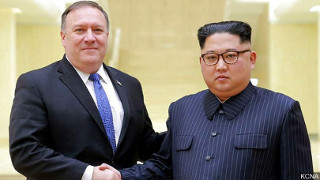 Reportedly, the US is softening its tone substantially in the talks, getting away from demands for a “complete, verifiable, and irreversible denuclearization” as the goal, now calling for a “final, fully verified denuclearization” at the end of the process.

This change is coming at the behest of South Korea, which has told the US that step-by-step negotiations are more likely to lead to a positive result than for the US to demand North Korea yield to everything at once.

The main problem with this policy change will be within the US, as opponents of the talks are going to present it as Trump weakening his position, and North Korea giving up something short of everything.

Still, South Korea’s belief that this is the best strategy is likely to carry a lot of weight, particularly since the South Korean government has been informing the US on a lot of the specifics of North Korea diplomacy. They have stepped in time and again during the process to keep the US from derailing the talks.