Media reports are quoting unnamed Israeli officials as saying that a few months ago, the US and Israel formed a joint working group centered on plotting against Iran. The focus of the group is fueling internal unrest against Iran. 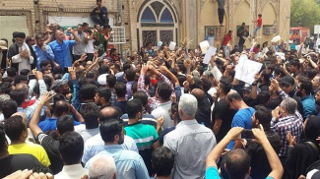 While US officials are unwilling to comment on the matter, the Israelis say the plot isn’t explicitly centered on trying to impose regime change. This is noteworthy, as both US and Israeli officials have been agitating for regime change for awhile.

Instead, it appears that the focus has been on sparking public protests against Iran’s Rouhani government., This puts the public protests going on inside Iran in a whole different light, and the revelation will likely hurt the protesters’ credibility.

It also doubtless weakens the US attempts to use the protests to try to sell the international community on supporting new US sanctions against Iran. This report will convince many that the protests are just dirty tricks from the US and Israel.

13 thoughts on “US, Israel Form Working Group to Plot Against Iran”