Trump Administration figures have expressed a long interest in imposing regime change in Iran. Top Trump aide Rudy Giuliani and Newt Gingrich are at the forefront of this push now, centered around the latest conference organized by the Mujahedin-e Khalq (MeK). 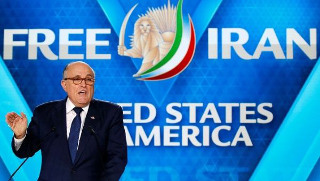 The MeK got its start as a Marxist Islamic group, and the US State Department long black-listed it as a terrorist group. MeK spending on advocacy from US officials eventually got them taken off the banned list in 2012, though they are often still described in very critical terms.

At this year’s conference, Giuliani predicted the end of the Iranian government, and declared it “must be replaced by the democratic government which Madam Rajavi represents.” Rajavi is the MeK’s leader.

Giuliani predicted that next year the MeK conference would be in Tehran. This is not a new prediction, as last year John Bolton addressed the previous conference and similarly predicted that the Iranian government would be wiped out by 2019.

These pledges to install the MeK within the next year fit neatly with the increasing administration interest in collapsing Iran’s government through sanctions, and the belief among top officials that this could be done quickly and easily.