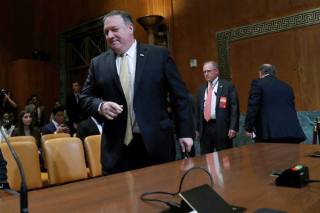 Pompeo sought to assure the Senators that North Korea definitely understands the US completely on the matter. He said the US has “been pretty unambiguous in our conversations about what we mean when we say complete denuclearization.”

Many opponents of the diplomatic track have suggested that the official statement from the Trump-Kim summit was too vague, and have dismissed the deal. North Korea has not given any reason to doubt that they mean complete denuclearization, however.

Indeed, even before the summit, North Korea was openly talking about a “nuclear-free” Korean Peninsula, an unambiguous position of their own. All indications are that, while denuclearizing is going to take time, it is going to be complete.

2 thoughts on “Pompeo: North Korea Understands US on ‘Complete Denuclearization’”