Syrian state media is reporting that an estimated 1,000 wanted men in southern Syria’s Daraa Province surrendered to the army on Wednesday. This included members of rebel groups, as well as draft dodgers and others. 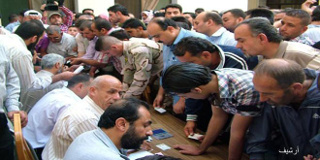 This was part of an attempted reconciliation effort. The Syrian government promised amnesty, saying they’d clear the records of everyone who reached out to the army for a surrender instead of waiting to be captured.

The Syrian government is planning a large offensive in Daraa, one of the last rebel-held areas in the country’s south. There are some moderate rebel groups in the area, along with al-Qaeda’s Nusra Front.

The offer is presumably an attempt to deal with potential rebel allies, and more moderate rebel groups, before the offensive begins in earnest. State media also accused al-Qaeda of trying to “thwart” the reconciliation effort, but did not offer specifics on how.

2 thoughts on “1,000 Surrender to Syrian Army in Southern Amnesty Offer”