With the first skirmishes of the Syrian southwestern offensive starting to grow into outright fighting, reports out of the area say that over 50,000 civilians have fled their homes in just the past week. This is overwhelmingly from the areas in the de-escalation zone expected to be major targets in the fighting. 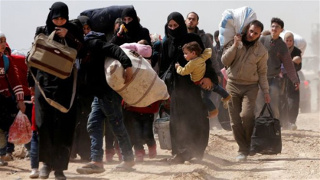 Journalists in the area say that at least 27 civilians were killed. The displaced are scattering in all directions, some going deeper into rebel territory along the border, others heading north out of the likely contested areas.

The de-escalation zone in Daraa was, for quite some time, totally calm, and a lot of the people living in this area were much safer than people in most of the rest of war-torn Syria. That zone is rapidly collapsing, however.

Syria has telegraphed their offensive against rebels in the area for months, as al-Qaeda’s Nusra Front has tried to attack army positions ahead of the offensive itself. With the fighting seeming likely to just grow in the weeks to come, locals are scrambling to find a safe place to wait it out.

4 thoughts on “Over 50,000 Civilians Flee Rebel-Held South Syria Ahead of Offensive”