Reports out of Cairo say that the Egyptian government is continuing to negotiate the terms of a proposed long-term truce between Hamas and Israel. The negotiations are now focused on coming to terms on a “comprehensive deal” between the two sides. 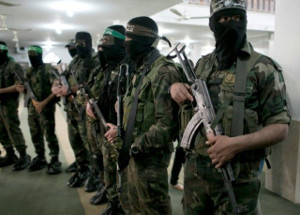 That deal, according to media reports, would involve Hamas returning all Israelis they are presently holding in the Gaza Strip. In return, the Gaza Strip would be given an airport and seaport, and further easing of the blockade which is causing dire economic problems in the area.

Israel and Egypt are both blocking Gaza, nominally to prevent Hamas getting advanced weapons. In practice, they are also keeping food in short supply. Fuel shortages lead to power shortages, and those power shortages also make safe water often impossible to find.

Having met with some of the officials, Egypt’s Mohammed ElBaradei said that the US has gotten involved behind the scenes, and is pushing the Palestinians to make major concessions. ElBaradei criticized this, saying the US demands were unfair and that they need to realize that “the right to freedom cannot be bought.”

21 thoughts on “Hamas Negotiating ‘Comprehensive Deal’ for Truce With Israel”