Speaking at a rally in Minnesota, President Trump announced that North Korea has returned the remains of around 200 US soldiers killed during the Korean War. This comes days after other US officials said such transfers would begin through UN Command in South Korea. 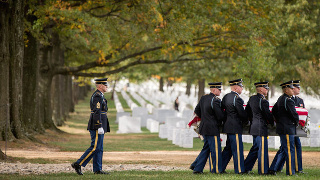 The US has long sought the return of troops unaccounted-for after the Korean War armistice, with military data suggesting 7,700  were unaccounted for. North Korea has returned limited numbers of remains over the years, adding up to about 200 other US troops.

Details are scant on the process of returning the remains, and the Pentagon itself has yet to make any such announcements about the bodies being returned. Given previous comments, however, this is likely just the start of an ongoing process.

The Korean War began in 1950, and an armistice was signed in 1953. Despite that, no peace treaty was ever signed ending te war, which is still formally ongoing. North and South Korea have recently discussed signing a peace deal, and the US has supported that plan.

One thought on “Trump: North Korea Has Returned Remains of 200 US War Dead”