Iraq’s Supreme Court ruled Thursday that parliament’s order for a full, manual recount of all 11 million ballots cast in the May 12 election must go forward. The electoral commission had contested this, saying a nationwide recount was not needed. 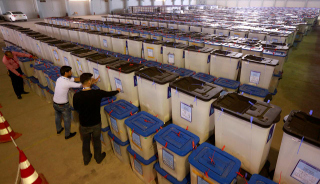 The court did, however, reject a secondary parliament order that all ballots cast by overseas voters, as well as all ballots cast by internally displaced persons (IDP) be thrown out, saying that would be unconstitutional. Some MPs had claimed these ballots were particularly vulnerable to fraud.

This ruling is very good for Iraq’s Sunni Arab minority, as they are the most heavily displaced population within Iraq, and having all those votes thrown out would’ve cut into their already limited representation in parliament.

The recount will further delay the final certification of the vote results, which saw cleric Moqtada al-Sadr’s bloc winning the largest plurality. Sadr was in the process of trying to come up with a majority coalition, and now is likely to be stuck waiting for a long, arduous recount, just in case it changes a seat or two somewhere.