With the three-day ceasefire in Afghanistan having ended on Sunday night, the Taliban have launched their first large-scale offensive of the resumed fighting, making substantial gains in the Badghis Province. 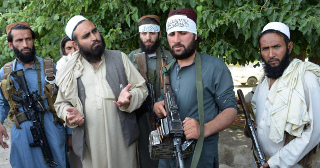 A multi-hour Taliban offensive involving fighters attacking from several directions overran a military base in Balamerghab District. The Taliban ended up in control over the base, killing 30 soldiers along the way. 15 Taliban were also reported slain.

In addition to take over the base, the Taliban also hit a pair of military checkpoints in the area around the same time, in the same district. These attacks were likely an attempt to district from the much bigger offensive on the base itself.

The three-day ceasefire was the first taste of peace Afghanistan has had in decades. There was even hope that a ceasefire extension would happen after a proposal by President Ghani. Instead, the fighting has resumed, and Afghan government forces are once again on the losing end of it.