A pair of major suicide bombings in the Nangarhar Province in eastern Afghanistan have killed at least 54 people and wounded in excess of 100 others over the weekend. ISIS has claimed credit for one, and is suspected as being behind the other. 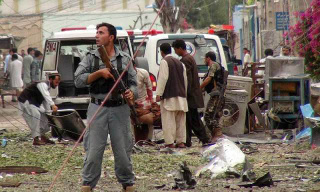 The first, and deadlier, suicide bombing came on Saturday. ISIS bombers hit a gathering of members of the Afghan security forces and Taliban, who were celebrating the three-day ceasefire for Eid al-Fitr. At least 36 people were killed.

A second bombing took place Sunday in the provincial capital, where a bomber attacked a group of people leaving the regional governor’s office. This strike killed 18 and wounded dozens. There has yet to be a claim of responsibility.

ISIS is presumed to be involved, however, because Nangarhar is the province where they have their largest presence in Afghanistan. The group has long been willing to attack both government forces and Taliban, and was not party to the Ramadan ceasefire.

Provincial officials say the death toll is expected to rise further in both attacks, as many of the wounded are in serious condition and some of them may not survive.