A Swedish call at the UN Security Council for an immediate ceasefire in Yemen’s port of Hodeidah was derailed during a closed session Friday. The US and Britain both expressed opposition to the measure, designed to prevent Saudi-led forces attacking a port responsible for feeding 8.4 million civilians. 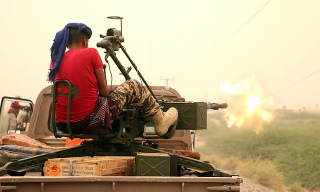 Britain insisted on the meeting being a closed session, meaning specific comments during the hearing, and the reiteration from UN officials of the humanitarian crisis threatening to kill millions, would not be done for the public to see.

US officials did not publicly comment on why they’re opposed to the ceasefire, but likely is a reflection of the Saudis really wanting to attack the city. British Ambassador Karen Pierce said their opposition was made purely based on “the British national interest.”

It’s not clear exactly how preventing food being delivered to Yemeni civilians is in the British national interest. This is likely a shorthand way of saying they too are backing the Saudi interest in seizing the city, and that the interest is to keep selling weapons to the Saudis to keep bombing the Yemenis with.

11 thoughts on “UN Rejects Plan for Ceasefire in Yemen Port”