Saudi and UAE-led forces attacking the Yemeni port city of Hodeidah are starting to make increasing progress on Friday, just three days into the attack. Their forces have seized the entrances to the city’s airport, and are marching down the main road toward the seaport. 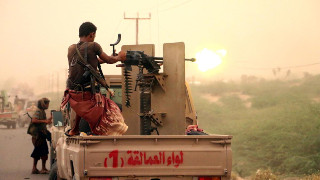 The airport itself is not under the control of the attacking forces, only the entrance. Emirati state media claimed that the airport roads had land mines within, and that it would take some time to battle their way from the entrance to the main building.

The march on the seaport is particularly important, as much of the point of this attack is to take away the rebel Houthi movement’s last port, which is being used to import food for millions of Yemenis in the country’s north.

Though officials are denying that the attack is being done to cut off food to the civilians in rebel territory, it clearly will be. Previous ports that fell to the pro-Saudi forces continued to accept aid ships, but would only send the aid to “loyal” cities.