The humanitarian crisis in Northern Yemen is set to get drastically worse, the UN is warning, as the lone sea port into the region, al-Hodeidah, has been attacked by Saudi and UAE-led forces. The port is responsible for feeding some 8.4 million people. 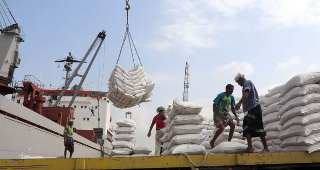 UN officials say they are continuing to send aid ships to the port now despite the offensive. So far, the attacking forces haven’t entered the city itself, though the ability to transfer the aid out of the city to the millions of civilians is uncertain.

The UN also says that they are considering humanitarian airlifts into northern Yemen as a way to keep distributing food if the port falls and the rebel-held territory becomes landlocked. Doing this on the scale of 8.4 million people would be an enormous endeavor.

Airlifts into northern Yemen have been tried in the past, and Saudi Arabia even attacked the airport in the capital city of Sanaa to prevent cargo planes landing there early in the war. A Saudi-led blockade of the coast has left northern Yemen on the brink of starvation, and medical shortages have killed large numbers of people.