A surprise part of the Kim-Trump summit in Singapore on Tuesday was the suspension of all joint US-South Korea war games going forward. President Trump said such exercises were “very provocative” and halting them was a big boost to diplomacy. 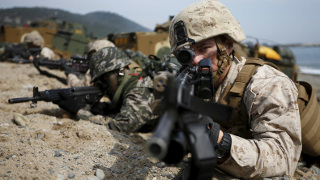 South Korea and China both agree. Chinese officials say that they support the idea, and likened it to their initial proposal for calming US-North Korea tensions involving “dual suspension” of war games and nuclear tests.

South Korean officials initially acted surprised on Tuesday, but on Wednesday the office of President Moon also endorsed the plan, saying such a freeze might be necessary to “expedite talks” with North Korea.

US war games with South Korea have often been a source of contention with North Korea, as they are almost exclusively designed around practicing invasions of the north. A recent air exercise involving US nuclear-capable bombers sparked a round of angry tit-for-tat statements that almost derailed the summit.