Fighting appears to once again be on the rise in the Idlib Province of northwest Syria, territory held mostly by Islamist rebels, but which is under increasing pressure from pro-government forces, and beset by airstrikes. 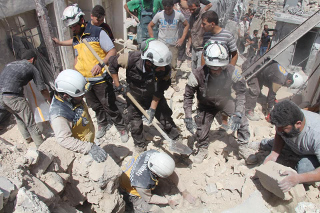 Syrian airstrikes killed at least 15 civilians in the town of Taftnatz and the surrounding area. The attacks were seen as retaliation for rebel attacks on Shi’ite villages in the area, despite only killing civilians, and not rebels.

The Shi’ite villages of al-Foua and Kefraya have been repeatedly attacked by rebels in recent years, and were attacked again over the weekend. Pro-government forces and local defensive fighters managed to repel the attack.

Both government and rebel groups seem content to attack civilians they see as supporting the other side in Idlib, with limited direct fighting between one another. This has made such engagements particularly deadly for bystanders in the area.