The full recount ordered by Iraq’s parliament last week in the May 12 election won’t be happening. A fire Sunday in Baghdad destroyed one of the storage sites for ballots, and reportedly destroyed a number of them. 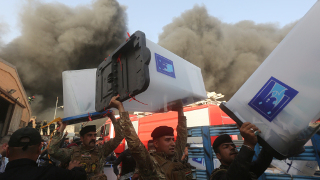 Salim al-Jabouri, the speaker of Iraq’s parliament, said this fire was a “deliberate” attempt to manipulate the vote, and is calling for the country to have a totally new election. He’s claiming the fire is proof of fraud.

A revote could only be good for Jabouri,  who lost he seat in the May 12 vote. Prime Minister Hayder Abadi, whose party did very poorly in that vote, is also playing up the idea that the fire was an attempt to cover up fraud.

Iraqi officials are giving all the signs they think this fire is intentional, but the officials complaining loudest about it seem also to be the beneficiaries of it, allowing them to push for the election they lost to be thrown out, and a