US special forces came under attack Friday in Somalia during a joint operation with Somali and Kenyan forces. The offensive was meant to seize a large chunk of territory currently controlled by al-Shabaab militants and establish a “permanent combat outpost.” 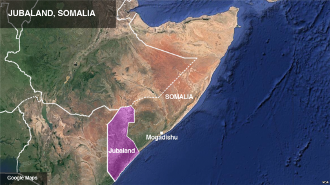 The US troops quickly found themselves on the receiving end of mortar and small arms fires, and in the ensuing fighting, one American soldier was killed, and four others wounded. A fifth soldier was wounded, described as “local,” but the Pentagon did not clarify if it was a Somali or Kenyan.

This offensive took place in Jubaland, a common target for Somali forces, but one which the Somali government has little control over. This isn’t unusual, as the Mogadishu-based government tends to have very limited practical control outside of the capital city.

The Pentagon has offered little else about the incident, but did say that of the four wounded US soldiers, one was treated sufficiently in the field, while the other three had to be medically evacuated. It is unclear where they were sent.

One thought on “One US Soldier Killed, Four Wounded in Somalia Fight Against al-Shabaab”