As Kurdish forces withdraw from the city of Manbij, which will be taken over by joint US and Turkish forces, the Kurdish YPG and its allies are exploring talks with the Assad government, saying they believe the time is right to start a dialogue. 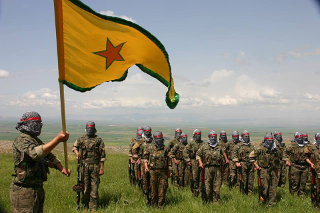 The YPG controls a territory they refer to as Rojava, a Kurdish autonomous region which encompasses a large portion of Syria. They say the goal of the talks with Syria’s central government is to end the conflict, and secure Rojava’s future as an autonomous region within Syria.

This has been their plan all along, but the Manbij situation suggests the US may be shifting away from the Kurds and toward Turkey, and that may mean the YPG needs a new ally to secure their position, particularly with Turkey saying they intend to take all the Kurdish territory in northern Syria.

Getting recognition for Rojava is likely to mean some concessions, likely the Kurds giving some of the non-Kurdish territory to the central government. The US has, despite supporting the YPG in the war, long expressed opposition to autonomous regions within Syria, saying they want a heavily centralized state.

7 thoughts on “Syrian Kurds Ready to Talk With Damascus”