At least 20 people were killed and over 100 wounded in the Iraqi capital city of Baghdad on Wednesday, when a pair of bombs went off at a Shi’ite mosque. The mosque was located in the Shi’ite-dominated Sadr City district. 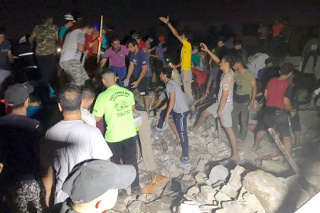 The bombs were planted near a cache of ammunition that was at the mosque. The explosion caused chaos in the surrounding area, and many of the wounded did not survive. Officials suggested that the death toll may further rise.

There has been no claim of responsibility yet for the attack, but ISIS is the most likely culprit, both as the largest militant faction within Iraq, and one that often targets Shi’ites specifically. Iraq’s inability to secure Baghdad is a long-standing issue that militants have sought to emphasize with attacks.

The attack taking place in Sadr City may also suggest a political angle, however. Top Shi’ite cleric Moqtada al-Sadr won the most recent Iraqi election, and did so in no small part because of overwhelming victories within Baghdad, particularly Sadr City.