On Monday, a gathering of Afghan religious scholars held in Loya Jirga meeting in western Kabul. The group denounced years of unrest in the country, and issued a fatwa formally outlawing suicide bombings. 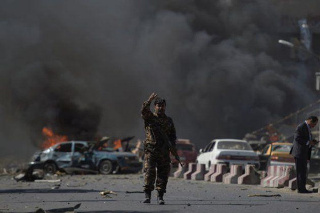 Immediately thereafter, a suicide bomber on a motorcycle carried out an attack on the outside of the tent in which the jirga was gathering, killing 14 people, including a number of clerics who had been in attendance.

This is the latest in a growing series of attacks across Afghanistan, particularly in Kabul, in recent months. The attacks have been killing a large number of people, both government officials and civilian bystanders.

Officials say they are unsure who was behind the bombing, though the ISIS affiliate in Afghanistan did issue a statement claiming credit. ISIS has tended to do that whether they were involved or not, though so far they offered no evidence that this attack was theirs.