Russia has begun substantial multi-year cuts on their own military spending, but that isn’t going to deter Pentagon brass who intend to keep using it for more spending to “counter” them. European Command head Gen. Curtis Scaparrotti is the latest to push this narrative. 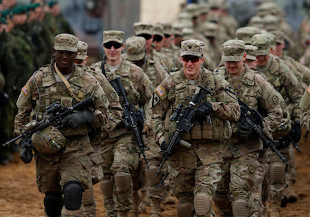 Gen. Scaparrotti suggested that the “modernization” of Russia’s military means that the US needs to deploy even more troops into Europe, with yet more equipment, to “deter” Russia. US officials have been claiming that Russia would invade Eastern Europe at some point.

NATO officials have conceded that’s not a realistic concern, and it’s even less realistic with Russia dialing back its military spending. Still, the costly deployments to Europe are politically popular for Eastern European NATO countries, and a justification for the Pentagon to get even more money.

While some of Scaparrotti’s comments are about getting more funding in general, he also suggested that “counter-terrorism” forces from the Middle East to Europe. This suggests he is envisioning the US withdrawing some of its forces from Iraq and Syria, and wants to get ahead of the pack in vying for those forces.