The Pentagon announced Wednesday that they have officially uninvited China from the upcoming RIMPAC joint naval exercise. The exercise is the world’s largest naval drill, held every two years. China has generally participated. 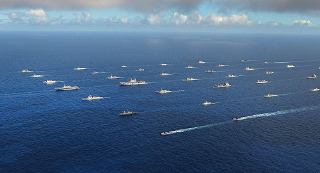 Pentagon spokesman Lt. Col. Christopher Logan says that the revoked invitation was “an initial response” to China’s “continued militarization of the South China Sea.” The US disputes several of China’s claims in the sea, and backs conflicting claims by all other nations.

Why this is just suddenly an issue is unclear. The US has been complaining about China’s Navy for years on end, and has mostly expressed its displeasure by sailing past Chinese islands, and saying that those operations were intended specifically to prove their displeasure at those claims.

Chinese officials said the announcement was “a very unconstructive move,” and that they hope the US will change its “negative mindset.” Former US officials say the move is “largely symbolic” and doesn’t change US-China military cooperation.