At least 61 Palestinian protesters were killed and thousands wounded in Israel’s violent crackdown against the Nakba Day protests. The international community is deeply critical of the killings, though the US has predictably blocked any UN action. 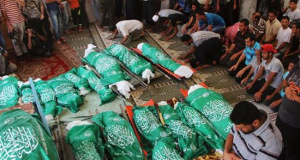 Within Israel, members of the far-right government are generally praising the killing, while the Israeli military itself is claiming that of the 61 people they killed, 24 are “known terrorists.” Not that they were killed for being known.

Rather, the killing was entirely a function of Israeli forces firing heavy machine guns into crowds of protesters along the border. Any attempt at justification of specific deaths are purely retroactive, as there is zero evidence that Israeli forces targeted anyone in particular.

The military’s position that some specific people were “known terrorists” also isn’t in keeping with the talking points of MPs, who claim that everyone in Gaza is guilty, and that everyone at the protesters were “Nazis.”