It’s seemingly a straightforward sequence of events – Israeli troops lined up along the Gaza border, firing machine guns into the strip at unarmed protesters, and scores of those protesters were killed, the US is desperate to portray it as a “propaganda” plot by Hamas. 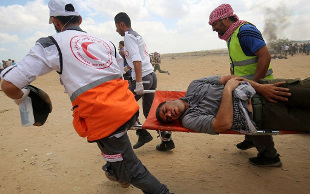 The White House portrayed themselves as wholly comfortable with Israel’s actions, saying they totally absolve Israel of any responsibility for all of those people they killed. Spokesman Raj Shah insisted the protests were Hamas’ fault, and the deaths are, too.

Shah further rejected reporter suggestions that Israel should show any sort of restraint, saying Hamas is responsible for whatever happens. He said Israel has an absolute right to engage in “self defense” against the protesters.

Historically the US would issue some vague call for all sides to exercise restraint in the face of a large death toll. White House officials, however, seem angered that the massacre has taken attention away from their new Jerusalem embassy, and seem determined to be entirely okay with whatever Israel does in response to the dissent.

61 thoughts on “White House: Israel Not to Blame for Gaza Killings”