While Israeli officials continue to insist they don’t “seek escalation” in Syria, they have been precipitously escalating the conflict along the border. Overnight, Israel carried out missile strikes against dozens of targets across Syria, an attack described as the most extensive Israeli attack on the country in decades. 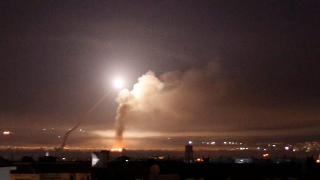 Preliminary reports have 23 people killed in the Israeli attacks, with 15 described by Israel as “foreigners.” Israeli officials are also claiming to have hit virtually all of Iran’s “infrastructure” inside Syria.

Israel is presenting this as retaliation for Wednesday’s rocket fire against the Golan Heights, which they are blaming on Iran. Iran is denying involvement, but even if they had the rocket fire would itself be retaliation for multiple Israeli attacks against Syria in recent weeks.

Russia reported that Syria intercepted half of the Israeli missiles. Israel is saying they also attacked and destroyed five Syrian anti-aircraft batteries during the attack because they batteries fired on Israeli warplanes invading Syrian airspace.

Though Israel’s attacks and escalations have been seen primarily as aiming to pick a fight with Iran, the more immediate danger is that Russia will at some point decide that enough is enough, and deny Israel access to Syrian airspace.