Federal Appeals Court judges are hoping to continue to dodge ruling on a lawsuit in which a soldier challenged the legality of the unauthorized war on ISIS. The judges now are asking the lawyers to tell them whether or not the lawsuit even matters anymore. 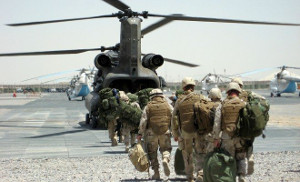 Capt. Nathan Michael Smith filed the lawsuit back in 2016, claiming the war is illegal. The judges say that now, since Smith will be leaving the military later in May, his own personal interest in the case is essentially gone. Moreover, they argue that the war seems to be wrapping up.

Of course, Smith filed this case way back in 2016, and had to appeal after the first judge refused to rule on it. The current panel took the case in October, and has effectively just sat on the case since then. Now, they too seem set to refuse to rule on the case.

There are, of course, serious legal reasons to challenge unauthorized US wars. Federal judges are so unwilling to rule on these questions, however, as to make the courts effectively useless as a check on power.

The Trump Administration argued back in October that wars are totally immune to court review, whether or not they are authorized by Congress. Rather than seeing that as a major challenge to their relevance, judges seem to see this as a ready-made excuse to do nothing.