The Pentagon is seeking private contractors to provide medical evacuation services to US ground troops operating inside Yemen. This solicitation began at the end of April, and seeks four fixed-wing and rotary-wing aircraft capable of providing services and having Ballistic Protection Systems. 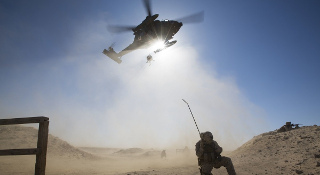 This comes amid recent revelations that the US has Green Berets operating along the Yemen-Saudi Arabia border, despite the Pentagon long maintaining their role in Yemen didn’t involve combat troops. In addition to these troops, the Pentagon is known to have special forces operating in Yemen against al-Qaeda.

US Transportation Command wants this to cover not only Yemen but nearby countries in the Horn of Africa. In practice this likely just means Somalia, where a number of US troops are present.

The reliance on contractors for these services are controversial. The Pentagon has long handled time-sensitive things like evacuation of casualties. As US forces spread across more and more countries in small numbers, however, the Pentagon is finding itself short of capacity, and is looking to make this up with contractors.