Saudi warplanes carried out an attack against the Yemeni capital city of Sana’a today, attacking the presidential palace and leveling it to the ground. Six people were killed in the strike, who were identified as civilians by local officials. Though early reports suggested Houthi officials may have been in the presidential palace, subsequent reports suggest this was not the case. 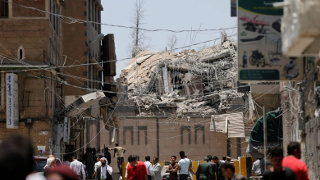 In addition to destroying the palace, a number of nearby businesses were badly damaged. At least 30 civilians were wounded in the surrounding area, with some reports suggesting the casualties could be far higher.

While the casualties weren’t nearly as high as some other Saudi airstrikes, they still provoked a lot of international criticism. The Norwegian Refugee Council, an aid group operating in Yemen, said they were “appalled” by the Saudis attacking such a highly crowded business district in the middle of the day.

That may be a particular problem for the Saudis, as this district is not just a crowded business district, but one of the richer ones in northern Yemen. This is an area that would, in times of peace, be frequented by foreign diplomats and businessmen, and features a five-star hotel.