While Israeli Prime Minister Benjamin Netanyahu and other officials are insisting they aren’t seeking a war with Iran, they take every opportunity possible to advocate such a war. Over the weekend, Netanyahu again demanded the world “stop” Iran. 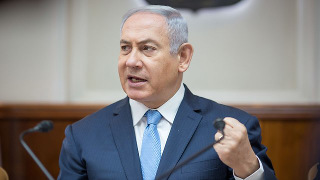 Netanyahu was very specific about being fine with a military conflict to “stop” Iran, and said that such a war should happen sooner rather than later. He said any conflict with Iran was “better now than later.”

Netanyahu’s accusations against Iran, as tend to be the case, were completely false. He claimed Iran was providing Syria with “Iranian anti-aircraft systems that will threaten air force jets.” This is demonstrably untrue, as Syria is acquiring its air defenses from Russia. Iran also buys its air defenses from Russia, and doesn’t have substantial Iranian-made systems that they could even theoretically provide Syria.

Israeli officials have been complaining to Russia for weeks about those air defenses coming to Syria, as they will complicate Israel’s constant attacks on Syria. Russia has shown no signs they are considering not sending those system however.

And Israel can’t do anything about Russian arms sales to Syria. Netanyahu’s strategy is to try to falsely spin these as Iranian systems, and use that as part of his decades of agitating for war with Iran. That Netanyahu is centering so heavily on the idea that Iran is helping Syria attack Israel is particularly outrageous, since Israel has been attack Syria regularly for years, and Syria has offered no more than token resistance.