Central Command is reporting a dramatic escalation in US airstrikes in Afghanistan. In the first three months of 2018 alone, US warplanes dropped 1,186 munitions on targets around the country. 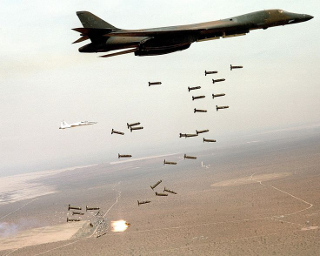 That’s not only far higher than recent years, ti’s also more than the 2011 level, 108 munitions. 2011 is considered to be the height of the US-led occupation of Afghanistan, and the war had been declining in intensity for several years since.

Strikes have been escalating since August, when President Trump announced a new escalation of the war. Pentagon officials say the airstrikes are focused on targeting “drug labs,” with an eye toward reducing the Taliban’s sources of funding.

While the “height” of the war didn’t work out for the US, and brought them to the much worse current situation, Pentagon officials defend the escalation. They argue that since President Trump doesn’t have a timetable for the war, the US can carry out “nonstop airstrikes” as long as they need to, with an eye toward showing the Taliban that they are determined to keep fighting.

Yet in reality this was much the same strategy as in 2011, when timetables were similarly loose. This similarly dragged on until officials decided to make dubious claims of progress and start a drawdown. Though the Pentagon sees no drawdown happening this time, it doesn’t mean continuing the war forever is going to accomplish anything.

2 thoughts on “US Airstrikes in Afghanistan Soar; Number Nears Height of War”