The US and its allies are preparing to attack the Syrian government. There are severe dangers this could mean a direct fight between the US and Russia. That’s just the tip of a very big iceberg in Syria, however, where the number of potential wars about to break out is growing by the minute.

The risk of belligerence between US and Russian forces is very high when the fighting turns to the Syrian government. Russia might shoot down an attacking US warplane, or US planes might attack Russian forces on the ground. Even unintentional targetings are a risk, given America’s notorious targeting struggles. After all, the US air campaigns in the region have frequent friendly fire incidents associated with them, with the benefit of accurate troop data they won’t have on the Russian positions. 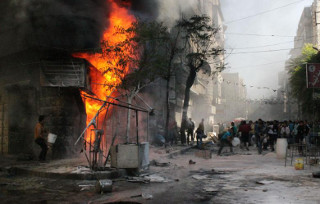 A US war with Russia would obviously be huge and calamitous. The two largest nuclear powers in the world have their worst bilateral relations in decades, and according to President Trump, ever. A direct conflict could escalate into World War 3, with the US having spent several years positioning anti-Russia forces around the Russian border.

US forces inside Syria are already looking at a possible conflict with Turkey over the city of Manbij. That’s because the US is allied with the Kurdish YPG, and Turkey is at war with them. The US troops are all embedded in YPG territory, and Turkey has threatened to make them a target over it. Turkey has also threatened to target British and French troops in Manbij for the same reason.

Turkey’s war with the YPG has also brought them to the brink of war with the Syrian government. Turkey has advocated regime change for years, but after the January invasion of Syria, to fight the Kurds, Syria sent reinforcements into the Afrin District to help the Kurds.

This is reflective of conflicting goals, and in some cases no goals at all. Russia is interested in protecting its access to a major naval port in Syria. Turkey is interested in fighting the Kurds, but also envisions the territory they’re seizing as “theirs” now, to rule as they wish. The US goals are ill-defined, based around knee-jerk reactions to the situation at hand.

It is this US policy that has meant so often that two US allies are directly fighting one another. It is also why time and again, US-backed factions accuse the US of “betraying” them by backing someone else. There is no end-game, just an ever growing tangle of alliances of convenience. Stumbling into a war with Russia was never the plan, and even if President Trump has repeatedly, openly warned of that risk in US policy in Syria, he seems unwilling to pivot away from that path.

And that’s all just in northern Syria. Further south, Israel has been attacking Syria for years. The strikes had mostly focused on Hezbollah, but are increasingly targeting Iranian forces. The Israeli military is openly advocating a military offensive against Iran in Syria, which could be another major war.

The biggest potential war, of course, is still the US against Russia. But among the US allies potentially getting involved is Saudi Arabia, who also have a keen interest in attacking Iran. This is another chance for the war to go regional.

Conflicting goals also prevail in the south, where Iran is keen to protect a friendly Alawite government, and access to Shi’ite religious sites. The Saudis, by contrast, want to install a Sunni Islamist government there, mostly to confound Iran. Israel’s interest is broadly just whatever seems worst for Iran at the time, with Israeli officials openly admitting they preferred ISIS win the war than the Syrian government surviving.

That’s not to say, of course, that Israel believes they’d get along with ISIS. Rather, the Israeli agenda is just to keep the war more or less going forever, to ensure that Syria is never stable enough to be a military counter to them in the region. As with neighboring Lebanon, keeping Syria weak and unstable would allow Israel to pick and choose occasional wars with them, and ignore them when it suits their interest.

5 thoughts on “Risks of Escalation Abound in Syria”