Speaking Thursday at a rally, President Trump said that the US is likely to pull troops out of Syria “very soon,” saying they’ll “let the other people take care of it now.” The US officially has around 2,000 troops in Syria. 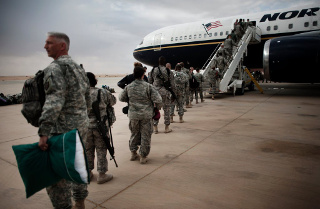 Trump told the rally that they are “knocking the hell out of ISIS,” and that the last of the ISIS territory is soon recovering. His presentation of this as the end of the US war in Syria is not in keeping with what other administration officials say, however.

The Pentagon has been talking up new military goals in Syria for months on end, with Defense Secretary James Mattis saying troops would stay in Syria to prevent the creation of an ISIS 2.0. The State Department plead ignorance to Trump’s comments, saying they are unaware of any planned withdrawals from Syria.

That’s unsurprising, however, as President Trump has often made off-the-cuff statements of policy without giving other officials a head’s up. Trump’s position on a pullout is in keeping with his own view of Syria as a very narrow anti-ISIS war, but a lot of other officials have staked out their own positions, essentially mirroring the US plan for permanent deployment in Iraq.

Iraq and Syria were both parts of the same ISIS war, after all, but has a serious distinction. Iraq has welcomed US troops in their country, at least for now, while Syria never authorized a US deployment. Syria continues to declare US forces in their country unwelcome, and it would be very difficult for the US to maintain an open-ended military presence there.

While US troops in Syria are not currently involved in a lot of combat, their withdrawal would extricate them from a tense situation with Turkey. Turkey intends to invade certain Kurdish regions where US troops are embedded, and seems set to do so whether the US remains or not. The suggestion of a pullout may encourage Turkey to be patient for a time on the matter.