Jaish al-Islam, the last rebel faction in Eastern Ghouta, a suburb of the Syrian capital of Damascus, has reportedly withdrawn for the time being from negotiations on leaving the city. Other rebels have all agreed to evacuation from the region, with the city of Douma the last of the rebel enclave. 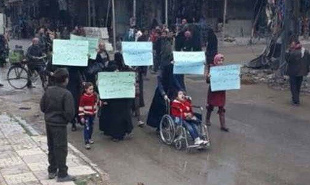 With Douma surrounded and Syria shelling the area, there is growing pressure to make a deal. Pro-government forces, however, say the rebels set out “big conditions” in talks with Russia, which were rejected by both Russia and Syria.

Douma’s residents aren’t necessarily up for this fight to the death, however, with hundreds of locals protesting in central Douma, calling on Jaish al-Islam to make a settlement. For now, that appears to be on hold, but talks will likely resume again before an outright invasion of the city.