National Security Adviser H.R. McMaster, the second in President Trump’s 14 month term in office, has been on the outs for awhile, and today was announced to be removed in the days to come. He will be replaced by ultrahawk John Bolton. 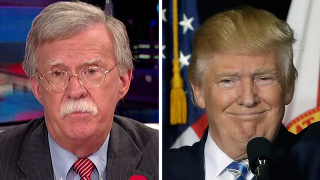 Gen. McMaster, a three-star general, was said to be out of favor with Trump almost immediately, and for months there’ve been reports the Pentagon was looking for something else for him to do. McMaster, however, will request retirement rather than get shipped to Afghanistan.

That leaves Bolton, a troublingly pro-war character who reportedly has been meeting with Trump on foreign policy matters, to take up the position, effectively April 9. Bolton’s recent writing have centered around advocating a US attack on North Korea, though in the past he has also advocated US attacks on myriad other countries, virtually anyone the US has anything more than a token disagreement with.

Bolton previously served, briefly, as the Bush Administration’s Ambassador to the UN, though this was only a recess appointment, with Democrats and Republicans blocking both a formal appointment in 2005, and refusing to confirm him, forcing him out in 2007. Since then, he’s mostly written privately to advocate assorted wars, will advocating for the Mujahedin-e Khalq (MeK), which was at the time on the US list of terrorist organizations, but was subsequently removed.

The MeK is part of Bolton’s long-time obsession with pushing for a US attack on Iran, which has led to protracted advocacy for US military aggression and desperate attempts to sway public opinion in such a way as a make such a war more politically viable. With Trump already set to kill the P5+1 nuclear deal with Iran, he finally has a National Security Adviser who will not only back such a move, but keep pushing for further escalation of tensions until the bombs start falling on Tehran.

How much this means for US foreign policy isn’t clear, but it can’t possibly be a good sign, despite CNN’s report Bolton promised not to “start any wars.”  Bolton has previously been mentioned as a candidate in several of Trump’s appointments, and has always been the most hawkish, most dangerous man on the list.