Having captured Afrin over the weekend, Turkey isn’t committing yet to exactly where they’ll be attacking next in northern Syria. Manbij, however, was long expected to be a next target, and Turkish officials are still not disavowing that. 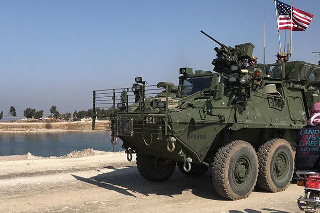 Manbij is the next closest Kurdish-held target for Turkey, but is potentially hugely complicated. That’s because the US has ground troops in Manbij, and they were put there specifically to try to dissuade Turkey from attacking the city.

Manbij was an ISIS-held city, but fell to the Kurdish YPG in a bloody, US-backed offensive. Turkey claimed at the time the Kurds couldn’t be allowed to keep Manbij,  on the west shore of the Euphrates, because it is Turkish policy that Syrian Kurds must all be east of the river.

Turkish President Erdogan is picking up the rhetoric against the US for supporting the YPG once again in recent days, demanding the US “respect” Turkey and stop trying to deceive them by backing Kurdish “terrorists.” Pentagon officials have warned before that US troops would defend themselves if Manbij is attacked.

The danger is that in attacking the city, nominally to fight the Kurds, Turkey could get into a direct fight with the US. That’s a battle neither nation wants, and one just weeks ago the two sides agreed to avoid. Still, Turkey’s next target is likely to be some Kurdish territory with US forces inside, and it may just be a question of which one.