Farming in Afghanistan isn’t easy. The various combatants in the country are always on the lookout for unfamiliar faces outdoors. It’s bad enough that the farmers feel the need to file official plans with the police, saying they’re going to be outside watering crops or working at specific hours, in the hopes that makes them not a target. 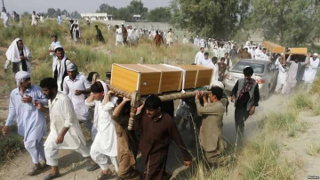 On Saturday, this failed spectacularly, as Afghan attack helicopters pounded farmers working in Nangarhar Province, killing at least nine of them. This led to public protests in the city, which saw police kill a protester. At the time police denied the incident, but now they confirm it happened.

Everyone has now gotten to the point where they’re trying to deflect blame. Police say the helicopters attacked “unilaterally.” Provincial officials say the Afghan military unit involved typically works with NATO, and particularly the US.

The US, for its part, totally denied involvement, but also claimed that the slain were “high-value Taliban,” despite them being conclusively identified as farmers, holding shovels, working in a field.