With the Saudi crown prince set to visit the US this week, the Trump Administration is scrambling to kill off a Senate bill that would end America’s involvement in the Saudi invasion of Yemen. This marks a rare serious challenge to an unauthorized war. 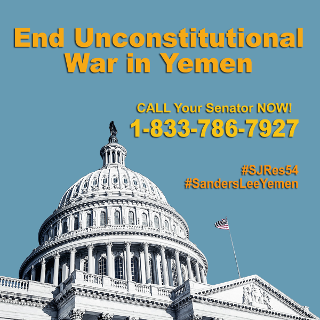 SJ Res 54 notes that the war is unauthorized, something administration officials have readily conceded, and demands that US end military involvement. A high-profile classified briefing was held, with Pentagon and State Dept officials warning the senators not to enforce the law.

The argument is two-hold. Firstly, officials argue the US involvement is “non-combat,” which is beside the point from the perspective of the War Powers Act. The more serious argument, however, is that if the US stops backing the war, US-Saudi relations would be greatly harmed.

While the US presents its involvement as minor, the Saudis are heavily dependent on the US selling them arms and offering in-air refueling services to Saudi bombers to keep them pounding northern Yemen. The Saudis seem to be operating under the assumption that this would continue.

SJ Res 54 still doesn’t have an exact time for its vote, but there is hope it would happen early in the week. The Senate leadership is hoping to delay the vote, but how long they can delay such a vote is unclear, as the bill’s sponsors don’t appear willing to let it go to a committee to quietly die.

Mohammed bin Salman, the Saudi crown prince, is eager to defend the war, spinning it as a conflict against Iran and al-Qaeda. He downplayed the thousands of civilians killed in US-facilitated Saudi airstrikes as part of the rebels trying to make Saudi Arabia look bad.