President Trump’s Wednesday fundraiser in Missouri is raising eyebrows in the news, as he suggested to donors that he is considering withdrawing US troops from South Korea if he can’t get a better trade deal out of their government. 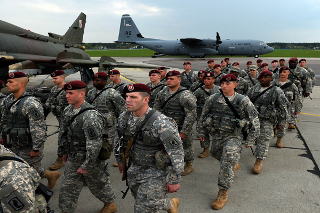 Trump didn’t go into tremendous details about whether this meant a full withdrawal or a drawdown, and a lot of analysts were very dismissive of the report, suggesting it was an empty threat and just a negotiating tactic.

Trump, however, is known to take trade deficits seriously, and directly ties those to the cost of having 32,000 US troops in South Korea, saying “we lose money on trade, and we lose money on the military.” During his 2016 campaign, Trump repeatedly expressed annoyance that the US was spending so much on its military to protect wealthy allies with big trade surpluses with the US. This clearly isn’t a new issue for him.

Recent rapprochements with North Korea may also suggest this is a serious effort. South Korea has been very keen to get on a better footing with the North, and President Trump has agreed to meet North Korea’s Kim Jong-un. The Trump-Kim meeting would clearly benefit greatly if the US didn’t have 32,000 troops on North Korea’s border, as North Korea has often expressed concern that the US will attack them.

Trump went on to declare to donors “our allies care about themselves. They don’t care about us.” South Korea has so far declined comment on the matter, with the exception of the Trade Ministry, which offered a dismissive declaration that they can’t “make comments every time President Trump” does.