Despite conceding that the US and others had effectively liberated “100%” of ISIS-held territory in Syria, National Security Adviser H.R. McMaster dismissed the idea that US forces might withdraw from the country any time soon. 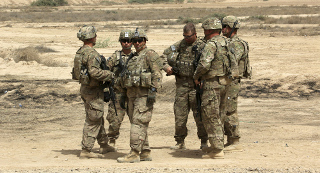 “We have more work to do,” McMaster insisted, saying the US will stay “until ISIS is fully defeated, population centers are stabilized, and refugees can safely return home.” This vision of stability also appears to depend heavily on imposing a regime change in Syria.

Underscoring the focus on regime change, McMaster demanded that “all civilized nations” come together to punish both Russia and Iran for backing the Syrian government. He warned Assad would not have impunity, and neither would Russia or Iran.

While US officials have been talking up regime change virtually throughout the Syrian War, it has only at times been tied to US military operations in the country, since nominally the US is there to fight ISIS. Still, with ISIS defeated, there is a sense that the troops aren’t leaving, and mission creep is being sought to justified that continued presence.